12u Teal and 13u Start Strong at Spring Fling

- April 27, 2021
Thunder 12u Teal and Thunder 13u opened up the tournament portion of their spring schedule at the Roselle Rockers Spring Fling this weekend. While both teams didn’t reach their ultimate team goals, there were plenty of highlights from a great opening weekend of spring softball. 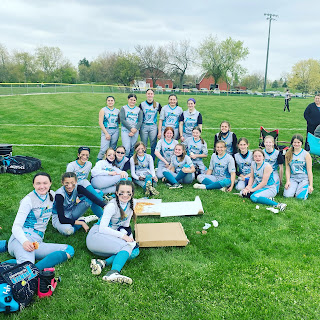 12u Teal opened the event with a Friday evening win against the host Rockers. In a back and forth affair, the Thunder prevailed 13-10. Three hits and four RBIs from Amalia and strong work on the mound from Kate lead the way with Viv adding two more RBIs en route to a whopping thirteen team hits in just a three inning, time limit adjusted pool play game.

13u Sweeps the Afternoon

After dropping their tournament opener and having an impromptu pizza party with our 12u Teal sisters, 13u bounced back to win both afternoon games against the Melrose Park Devils and Roselle Rockers. Similar to Teal’s matchup with the Rockers 12u team, the Thunder came back to win 13-10, with the winning runs crossing the plate on a grand slam from Paige. Both teams bit the ball really well so the fans looking for offense weren’t disappointed.

Fresh off a win against 12u Black on Thursday, the Pro Player Hurricanes gave 12u Teal everything they had on Saturday, but the Thunder were able to hold on to an important 3-2 victory to close out pool play. Both teams featured strong pitching performances and a game winning bomb to right field by Amalia proved to be the difference.
Check out the highlight reel from this weekend's action

A rematch with the #2 seeded Homer Heat awaited 13u after winning their opening bracket play game against the Melrose Park Devils 7-0. Unfortunately for the Thunder, it seemed like every ball we hit was right at someone and every ball they hit found a hole. The Thunder fell in the second round of bracket play, but it was a strong start to the spring season.

In their quarterfinal matchup with Melrose Park, Teal jumped ahead 7-4, but the Devils’ bats came alive in the final frame, pushing them to a 10-7 victory. Strong pitching from Kate again paced the Thunder and another home run from Amalia coupled with a key line drive single and three RBIs from Lola helped power the offense. In the end, the Devils just had a little more offense and that proved to be the difference. Congratulations to Melrose Park, who went on to win the 12u division championship.

Anytime you can win more games than you lose in tournament play, you have to consider the weekend a success and this definitely qualifies. This was a really fun and well-organized event, and one that Thunder teams will definitely participate in for years to come. Kudos to the organizers for doing such a nice job and providing a great weekend of spring softball.

Several Thunder teams open up tournament play this upcoming weekend with 10u Black, 11u, 12u Black and 14u all in action. Be sure to check GameChanger for dates and times as well as for links to watch the live streams of the games if you can’t attend in person.
It’s going to be an exciting spring, Thunder BOOM!