10u Black brought the Thunder in a pair of wins on Saturday, beating league opponent Titan Fastpitch 7 – 2 behind strong pitching and timely hitting, then broke out for 16 hits includes doubles by Jessica, Lexi (2), Leah and Graceleen, and triples by Olivia and Keira, to beat the Kenosha Fusion 14 – 4. Check out some of their blasts in the video below.
Up Next: 10u Black continues league play later this week, hosting first place Deerfield on Thursday before an off weekend.

10u Teal remained undefeated in league play, taking down the host Titans by a final score of 8 – 6. A combined strong effort by Hannah and Kat on the mound led the way. Teal fell in their afternoon game against the Fusion, despite tallying ten runs and outhitting the Fusion 14 – 6.
Up Next: 10u Teal opens up tournament play this weekend in Barrington against Lake Zurich, the host Bandits and the ESAA Storm. 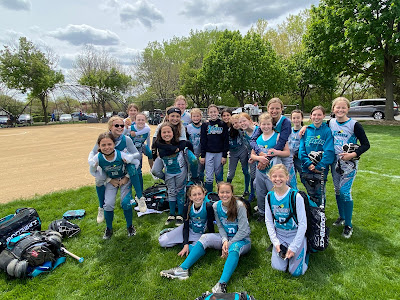 Our 10u Teams hanging out between games, we are Family!

11u played a thriller against the Lombard Thunder on Thursday night, playing to a 13 – 13 tie. A rematch with the (other) Thunder awaits on Tuesday, one of SEVEN games on the slate for 11u this week.
Up Next: League play ratchets up with 5 league games in 6 games this week! 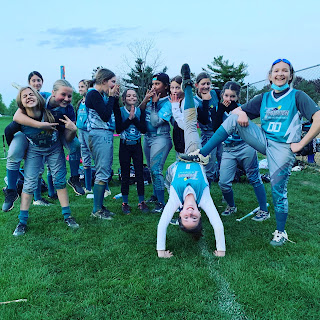 A win would have been nice, but we can still have fun with a tie!

12u Black grabbed a pair of league wins this weekend, beating the Libertyville Cats 20 – 4 on Friday night and the Northbrook Spartans 10 – 4 on Saturday. Iris was nearly unhittable on Friday striking out nine and allowing just one hit across four innings while Jillian provided the offense with a three-run bomb that pushed the lead to double digits. On Saturday, Iris and Mary combined to allow just three hits to the first place Spartans and doubles by Ellie and Maeve powered the offense.
Up Next: League play continues on Tuesday afternoon with a rematch against the Grayslake Pride, then a double header with the Skokie Slammers awaits on Sunday.

12u Teal played the most exciting games of the weekend, taking a 4 - 3 loss (in 10 innings!) Thursday night to BRW before holding on for an 8 - 7 win against the Elmhurst Cougars on Saturday. Kate and Amalia combined to allow just two earned runs across 9 2/3 innings, striking out nine along the way. Something tells me playing all these close games is going to pay huge dividends on tournament and playoff Sundays!
Up Next: A rematch with BRW follows a Tuesday night tilt with the Roselle Rockers, who are looking to avenge a tournament loss to the Thunder from a few weeks back. 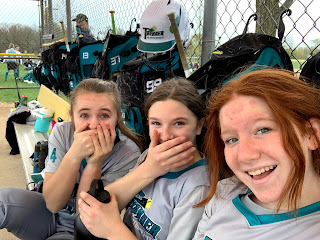 Did someone say extra innings?

13u stayed unbeaten in league play with a pair of wins against the Windy City Sandlot. Maggie was terrific on the mound, throwing a complete game shut-out in an 8 - 0 win in the first game of the double header. Then the bats on both sides broke out with Gemma, Liz and Maggie leading the way with two hits apiece as the Thunder swept the double header, winning the night cap 15 - 10.
Up Next: The Thunder step out of league play to take on Park Ridge Monday before beginning their second tournament on the spring this weekend in Addison. 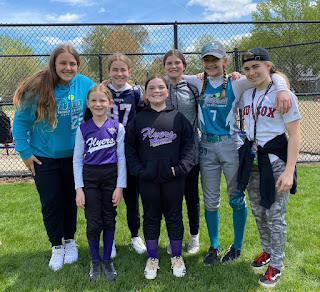 Thunder (and Junior Thunder) were in action this weekend!

14u also played a doubleheader on Saturday, taking the first game against Mundelein 11 – 7 before falling in the night-cap, 6 – 5. Ellen led the way with two hits, including a towering home run in the first game, while Gabby struck out 9 across 6 innings of work. Strong pitching was the focus of the second game with Paige striking out 6 across three innings for the Thunder.
Up Next: 14u heads to Barrington on Wednesday before a doubleheader with the Warren Wave on Sunday.