Weekend Recap: 13u Stays Undefeated in League Play, 11u Grabs First Tournament Win of the Spring

All seven Thunder teams were in action this weekend, let’s check in and see how they did. 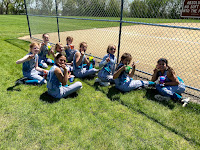 10u Black opened tournament play this weekend in Johnsburg. Timely hitting (like this game-tying line drive to right field by Olivia) kept the Thunder close during pool play before eventually falling to tournament runner-up CTW in bracket play.
10u Black is right back to work with three games this week including their league opener on the road on Saturday in Glenview.

10u Teal had a pair of friendlies on Saturday against the Park Ridge Pistols and the ESAA Storm. Kylie, Katherine, and Mallory all collected multiple hits while Taryn added multiple hits and a solid inning on the mound in the second game.
10u Teal opens up league play this week against the Deerfield Warriors and Glenview Titans.

11u began tournament play this weekend securing their first tournament win of the season over the Oswego Outlaws despite the crazy conditions before falling in bracket play to the eventual champion. The girls (and their families) celebrated their first tournament win with a team dinner at a really cool nearby restaurant, which was a ton of fun for everyone.
League play picks right back up for 11u with seven league games in the next week and a half! 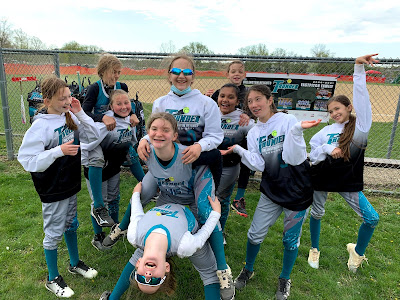 11u celebrating their first tournament win of the spring

12u Black started tournament play with a pair of wins against KR Fastpitch, including a 13 - 2 win in pool play highlighted by strong pitching from Iris and Mady as well as home runs from Libby and Iris. The Park Ridge Pistols again played the foil though, knocking the Thunder out of bracket play in the semi-finals. Check out the cool video below that shows these two home runs plus Maeve’s blast from the first game, league play opens this week with games against Deerfield, Libertyville and Northbrook.

12u Teal continued league play this week, splitting a doubleheader with the NW Elite Bandits. Teal won the first game behind solid pitching from Kate and two RBIs from Ali, but the Bandits rallied back for an 11-10 win in the nightcap. Ali was strong on the mound and Naomi collected 3 hits as the Thunder outhit the Bandits 12 – 8 in the second game.
League play continues this week with two more league games against the BRW Blast and Elmhurst Cougars.

13u collected two league wins last week, running their record to 3 – 0 in the young season. The first was a thrilling come from behind victory in Grayslake while the second was a strong all-around performance at Deerfield. Allie pitched her first complete game of the season allow just five hits while striking out four in the latter while Maggie led the way on the mound against Grayslake. Payton tallied 5 RBI to key the Thunder’s comeback against the Pride while every player collected at least one hit against Deerfield, led by Aubrey’s 3 – 3, 5 run effort, and Nora’s 2 – 3, 4 RBI day.
The Thunder step out of league play to take on Palatine this week before jumping right back in with a double header against the Windy City Sandlot on Saturday.

14u opened tournament play with a rally in the bottom of the last inning to tie Elgin 4 – 4 before time expired, then ran into a buzz saw Yorkville Foxes team, that would go on to win the entire tournament. Strong pitching and a few key hits from Gabby led the way as Gabby, Ellen, and Ellie all tallied two RBIs in the finale against the Rowdie Katz.
14u’s schedule this week features a league game at Grayslake plus a double header with Mundelein on Saturday. 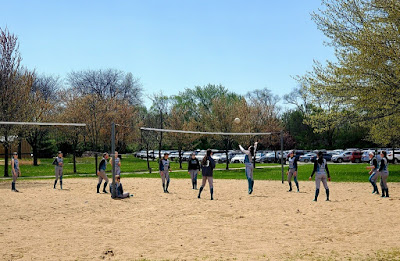 14u Getting a little volleyball in between games